Apologies for not being very consistent for the past few weeks; tinsel and baubles took over my brain, leaving not much room for anything else. I hope everyone had a wonderful Christmas / Holiday time. How did you spend them?

As happens most years, I received a lot of wonderful books for Christmas. Some I asked for, others are a complete surprise, but all of them are very exciting. As seems the tradition among book bloggers and book lovers alike (and I love it!), I thought I’d share these new additions to my bookshelves with you.

How it works: The dog.

Ladybird Books must have done extraordinarily well this Christmas. The new series of Ladybird books aimed at adults with topics such as ‘The Shed’ (my dad received this one),

‘Red Tape
‘ (for my Uncle) and ‘Boxing Day’ (from me to my sister) were surely a feature in a lot of Christmas stockings. I received ‘How it works: The dog‘, and it is fantastic. Pairing old Ladybird drawings with modern-day spoof captions creates a quick, very entertaining read, destined to be whipped out multiple times over the Christmas season to share with guests and family members. It’ll sit next to my copy of ‘How it works: The Hangover’ ready for the next time I need a chuckle.

Synopsis: Will has never been to the outside, at least not since he can remember. His mother, a fiercely loving yet wildly eccentric agoraphobe, panics at the thought of opening the front door. Their little world comprises only the rooms in their home. But soon the confines of his world close in on Will. Despite his mother’s protests, he ventures outside and befriends a young boy named Jonah. Will welcomes his new world with enthusiasm, but it soon gets complicated. When a local boy goes missing, Will and Jonah decide to uncover what happened. Their extraordinary adventure pulls Will far from his closed-off world and into the throes of early adulthoo 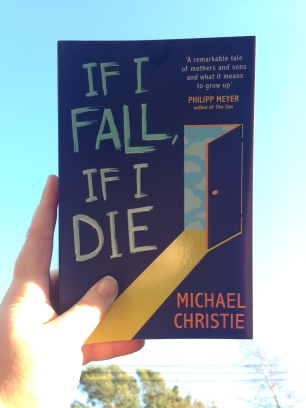 d and the dangers that everyday life offers.

This was a marvelous surprise. As I pulled off the Mr. B’s Emporium of Reading Delights wrapping and began to read the blurb, Mum asked ‘you haven’t read it have you? It seemed like such a you book I had to get it, but it is such a you book I thought you must have read it’. She had apparently been worried for a while. Much to my delight, and her relief, I hadn’t read, or even heard of this book, but it sounds so intriguing I can’t wait to dive in. I have read a lot of books about young people with mental health diagnoses, but I have never read anything about a parent with a  mental health problem. It’ll be fascinating to explore more about the other side and the different effects that this illness can have on a family unit rather than just the individual.

Synopsis: When a man who calls himself a faith healer arrives in a small, west-coast Irish village, the community is soon under the spell of this charismatic stranger from the Balkans. One woman in particular, Fidelma McBride, becomes enthralled in a fatal attraction that leads to unimaginable consequences.

The other surprise in this haul, I know nothing of what to expect from this. I am a little hesitant, and it probably isn’t a book I’d buy of my accord. It sounds historical – not my fa 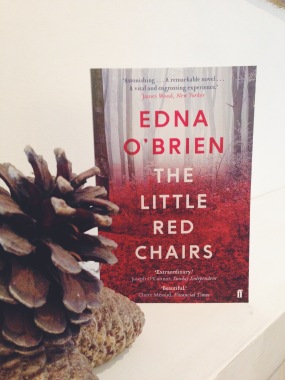 vourite genre – and the fact that my Grandma used to read O’ Brien’s work also intimidates me slightly. The closest my Grandma got to an easy read was Pride and Prejudice, she refused to read Harry Potter, and as a proofreader for Faber and Faber, she only ever seemed to read non-fiction, reference, or literary fiction (or at least that’s the impression I have of her). In short, her reading habits seemed to have been the opposite of mine.

That being said, there is something about this book that intrigues me. Maybe it’s the slight family connection. Perhaps it’s the sense of mystery portrayed in the blurb. Whatever it is, I am sure I’ll pick it up sometime soon and only then can I truly decide whether or not it’s for me or not.

More Happy than Not.

Synopsis: Sixteen-year-old Aaron Soto is struggling to find happiness after a family tragedy leaves him reeling. He’s slowly remembering what happiness might feel like this summer with the support of his girlfriend Genevieve, but it’s his new best friend, Thomas, who really gets Aaron to open up about his past and confront his future. As Thomas and Aaron get closer, Aaron discovers things about himself that threaten to shatter his newfound contentment. A revolutionary memory-alteration procedure, courtesy of the Leteo Institute, might be the way to straighten himself ou

t, But what if it means forgetting who he truly is?

This book has been everywhere. Everywhere. It has received multiple accolades, topped many a best seller list, received rave reviews, been featured on Instagram and mentioned on Twitter more times than I can count. Without a doubt it sounds interesting; featuring many topics that I find absorbing in a book: mental illness, exploration of sexuality, identity, friendship, but for some reason I have been hesitant to purchase it. I’m not sure why. It could be the really high praise it has received, the possible sci-fi-esque element, the cover, the fact that Waterstones don’t stock it. Whatever it was, I have it now, and I couldn’t be more excited. I have no idea what took me so long but I am kicking myself. I definitely foresee myself picking this up of an evening, and not putting it down until I reach the last page.

Holding up the Universe.

Synopsis: Everyone thinks they know Libby Stout, but no one’s ever looked past her weight to see who she really is. Since her Mum’s death, Libby’s been hiding, but now she’s ready for high school.

Everyone thinks they know Jack Masselin too – sexy, aloof and too cool for school. But Jack’s swaggering confidence is to hide a secret he must keep at all costs.

Then Jack meets Libby. And their worlds change. Because sometimes when you meet someone, the whole universe just comes into focus.

Jennifer Niven’s previous book ‘All the Bright Places’  broke a lot of people’s hearts, including my own. But somehow it also managed to portray a hope and a light amongst the sadness of the story. Since its remarkable success, I have been waiting for this, Niven’s second novel, to hit the shelves. To say that I am excited would be an understatement, but to say that I am not a little nervous would be another. This tale, from what I garner from the blurb and other pieces of information, is about weight, extreme weight, and that is a sensitive topic. We all know that Jennifer is no stranger to delicate and challenging themes and the evidence, as do the reviews it has already received, does show that she can portray them and do them justice in an understanding way. However, as someone who is overweight, I am interested to see how this book sits with me.

Synopsis: Even before she made a name for herself on the silver screen starring in films like Pitch Perfect, Up in the Air, Twilight, and Into the Woods, Anna Kendrick was unusually small, weird, and “10 percent defiant.”
At the ripe age of thirteen, she had already resolved to “keep the crazy inside my head where it belonged. Forever. But here’s the thing about crazy: It. Wants. Out.” In Scrappy Little Nobody, she invites readers inside her brain, sharing extraordinary and charmingly ordinary stories with candor and winningly wry observations.
With her razor-sharp wit, Anna recounts the absurdities she’s experienced on her way to and from 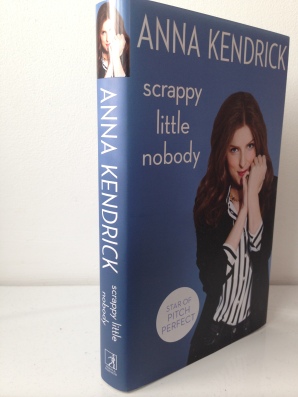 the heart of pop culture as only she can—from her unusual path to the performing arts (Vanilla Ice and baggy neon pants may have played a role) to her double life as a middle-school student who also starred on Broadway to her initial “dating experiments” (including only liking boys who didn’t like her back) to reviewing a binder full of butt doubles to her struggle to live like an adult woman instead of a perpetual “man-child.”
Enter Anna’s world and follow her rise from “scrappy little nobody” to somebody who dazzles on the stage, the screen, and now the page—with an electric, singular voice, at once familiar and surprising, sharp and sweet, funny and serious (well, not that serious).

Anna Kendrick has written a book! And that’s all that needs to be said on the topic! Ever since she announced she was releasing a book, in typical Kendrick fashion, I have been waiting for it. She is so funny, talented, quick-witted and seems incredibly down to earth. Whilst I’ve seen, and love her, in a lot of things, I don’t really know that much about her (compared to other famous people), so I am really intrigued to read about her, her life, her rise to fame, her experiences, and her quirks in her own words. Again, this is one I predict may be finished in one sitting – with a lot of laughter!

Merchants of Culture: The Publishing Business in the Twenty-First Century

Synopsis: These are turbulent times in the world of book publishing. For nearly five centuries the methods and practices of book publishing remained largely unchanged, but at the dawn of the twenty-first century, the industry finds itself faced with perhaps the greatest challenges since Gutenberg. A combination of economic pressures and technological change is forcing publishers to alter their practices and think hard about the future of the books in the digital age.In this book – the first major study of trade publishing for more than 30 years – Thompson situates the current challenges facing the industry in a historical context, analysing the transformation of trade publishing in the United States and Britain since the 1960s. He gives a detailed account of how the world of trade publishing really works, dissecting the roles of publishers, agents and booksellers and showing how their practices are shaped by a field that has a distinctive structure and dynamic. This new paperback edition has been thoroughly revised and updated to take account of the most recent develop

ments, including the dramatic increase in ebook sales and its implications for the publishing industry and its future.
Publishing, it’s the industry I want to enter sometime soon after graduation. Yet, it is an industry that I know little about regarding its intricacies and inner workings, and this is something that I want to, need to, and am enthusiastic about changing. And what better way to learn about the book industry than through a book! Asking some of my newly acquired Publishing friends on Twitter, it was clear that Thomas’s book came highly recommended. Onto the Christmas list it went. It’s a big book, a big, intriguing book full of graphs and figures and jargon that I may or may not understand. It will not be a quick read but reassured by the fact that I have seen it pop up on Instagram accounts belonging to Publishing students I am intrigued and raring to dip into it and increase my knowledge.

So there it is my Christmas book haul – I hope it was interesting. What did you receive for Christmas? How were your holidays?  Are there any books on here that I should make a priority? Let me know in the comments.  😀

There was an error retrieving images from Instagram. An attempt will be remade in a few minutes.