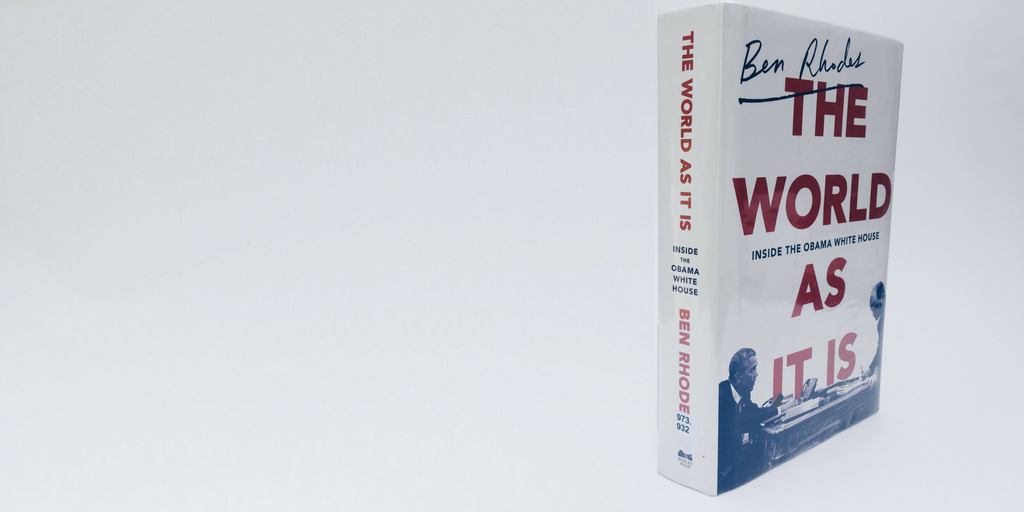 There are some books which are relatively easy to close the back cover on. Others are harder to leave behind; this was one such book. I lingered over the last line, feeling unusually emotional about a non-fiction book and feeling unduly sad that The world as it is belonged to the library, not to me.

The life of Ben Rhodes, from his job on the campaign trail to the last goodbye at the White House, was rarely independent of the presidential career of Barack Obama. By that virtue, this book advertised as Rhodes’ memoir was more recognisable as an intimate and humane look at the intricacies of White House decision making. The ups, downs, triumphs and frustrations of life-changing decisions were all documented.

Focusing primarily on foreign policy it was an enlightening look into the inner workings of the oval office, the frustrations and challenges unique to Obama and the groundbreaking election result of a black American, fighting against a highly defensive Republican-dominated Congress.

As someone whose interest is primarily in the people affected rather than the big global decisions in politics (my sister’s particular interest), I was relieved to find that the very readable tone of the prologue continued through the rest of the 400-page exploration. Furthermore, it was careful not to indulge itself in a dry (in my opinion) blow-by-blow of foreign policy. Instead, those decisions, as well as others, are firmly contextualised by the people making and influencing those decisions, the man and thought processes. The disputes, wrong turns, miscalculations as well as the joys and accomplishments were all captured within the firm belief that although a President, Obama was first and foremost a human being, a person  – something which many of his critics appeared to forget as many of them spread lies and ‘fake news’.

The heavy moments were relieved by the moments of levity. Some were extraordinarily heartfelt and almost seemed unlikely for a politician, for example, the somewhat off-tune rendition of Amazing Grace in the Charleston Church following the terrorist attack which resulted in the deaths of nine church members. Others, such as the mental image of Obama singing Thrift shop by Macklemore in the ‘Beast’ on the way back from a presidential visit were so relatable that I couldn’t help but smile.

I wanted a hero,” writes Rhodes as he begins to explain why he left his creative writing education, instead turning his talent to speech writing. He openly admired Obama and what he was fighting for in post 9/11 America. However this admiration remained firmly grounded in the realities of working in such a position. Never did this become a saccharine profile of Obama. Instead, Rhodes’ documented his frustrations, misgivings and surprise in just the same way as everything else was documented. This was not a glorification of the Obama administration, nor did it shy away from its shortcomings and it’s mistakes. It did not blame others when it was clear that no other was to blame. Instead, and of course this does need to be said whilst acknowledging the biases that could be present, it was an exploration of a life so closely interlinked with politics – illustratively, the moments of Rhodes life such as the birth of his two children, very rarely appeared and when they did they were comparatively short entries.q

Ben Rhodes, Book review, Review, The world as it is

One thought on “Book review: The world as it is by Ben Rhodes” Leave a comment ›