Disclaimer: This title was very kindly sent to me by Canongate.

One night in October, thirteen-year-old Sal and Peppa, her 10-year old sister, run away from home. They run from their alcoholic mother and her sexually abusive partner, the crime that Sal has committed, and the authorities they believe will split them up. 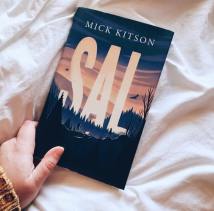 Sal planned it for almost a year before they ran. And now Sal knows a lot of stuff. Like how to build a shelter and start a fire. How to estimate distances, snare rabbits and shoot an airgun. And how to protect her sister, Peppa. Because Peppa is ten, which is how old Sal was when Robert started on her.

Told in Sal’s distinctive voice, and filled with the silent, dizzying beauty of rural Scotland, Sal is a disturbing, uplifting story of survival, of the kindness of strangers, and the irrepressible power of sisterly love; a love that can lead us to do extraordinary and unimaginable things.

Whilst young adult literature is becoming more comfortable and expansive; exploring difficult contemporary topics, such as alcoholism and abuse, this YA novel – a debut – felt wholly unique. Told directly from the voice of Sal, the writing style and cast of characters felt much like the environment they find themselves in: sparse (at least at first glance).However, it still felt complete. The shock of finding two children in such a position, paired with the facts-first-feelings-later account, was unusual but effective.

An exploration of survival, sisterly strength, resilience, and what children are capable of (both positive and negative) when the right (or wrong) circumstances are presented, this is an ambitious tale. In its simplicity, it prodded and poked at my emotions, creating tensions within those feelings, especially as you learn the details of Sal’s final decision regarding her family and her home.

The ensemble of characters, while small are nuanced and they complement each other superbly. While Sal is a little dry and overly single-focused, Peppa is a powerhouse of enthusiasm and energy. Sal keeps Peppa safe and Peppa reminds Sal that they are alive and having an adventure.

I am aware that this review is short but with a book so simplistic on the surface, and much less simplistic underneath, the less that is given away the better for the future reader.