2019 is here, and already it’s off to a better start than 2018. I haven’t done anything amazing or made any drastic life decisions; I just feel happier this year. That is, apart from in my reading. January is always a slow reading month, and January 2019 has been no exception; it’s been even slower than 2018.

Here are the three books that I read in January:

As I write this, I am listening to the latest episode of the No such thing as a fish podcast. If you haven’t listened to No such thing as a fish I highly recommend you do; especially if you are a fan of QI. Each week Dan, James, Anna, and Andy (four of the QI elves) bring to the podcast their favourite facts from that week and discuss them in what is a wonderfully geeky and hilarious 40 mins (rough approximation). The book of the year 2018 is the same but in book form. Arranged alphabetically, I loved dipping in and out, learning new, often obscure, facts and events that had occurred in 2018 – it was nice to be reminded that not everything was doom and gloom. 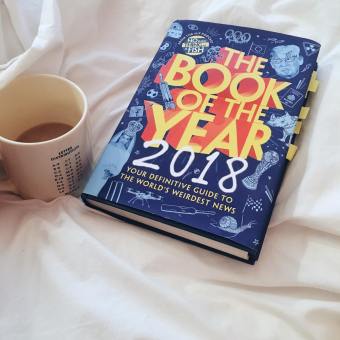 Author: No such thing as a fish
Published: Random House, 2018
Genre (According to Goodreads): Non-fiction

Blurb:
In a year dominated by Russian collusion and Brexit confusion, The Book of the Year returns with another dose of barely believable yet wholly unimpeachable facts and stories from the past twelve months.

Every week for the past four years, Dan, James, Anna and Andy – the creators of the award-winning, chart-topping comedy podcast No Such Thing As A Fish – have wowed each other and millions of their listeners with the most astonishing trivia they have learned over the previous seven days. Now, once again, they have put down the microphones, picked up their pencils, and transformed a year’s worth of weird and wonderful happenings into one uplifting book that you won’t be able to put down.

Discover how Peruvian mummies affected the World Cup, and why Love Island contestants are experts in game theory – as well as hundreds of stories that may have passed you by entirely, including the news that:

· NASA sent a man with a fear of heights to the International Space Station.
· An ice hotel in Canada caught fire.
· Mark Zuckerberg’s private data was compromised while he was talking to Congress about compromised data.

From Kim Jong Un’s personal potty to Jeremy Corbyn’s valuable vegetables, The Book of the Year 2018 is an eye-opening tour of yet another incredible year you didn’t know you’d lived through.

You can read my full review here.

Blurb
Sal planned it for almost a year before they ran. She nicked an Ordnance Survey map from the school library. She bought a compass, a Bear Grylls knife, waterproofs, and a first aid kit from Amazon using stolen credit cards. She read the SAS Survival Handbook and watched loads of YouTube videos. And now Sal knows a lot of stuff. Like how to build a shelter and start a fire; how to estimate distances, snare rabbits, and shoot an air gun; and how to protect her sister, Peppa–because Peppa is ten, which is how old Sal was when Robert started on her.

Told in Sal’s distinctive voice, and filled with the silent, dizzying beauty of rural Scotland, Sal is a disturbing, uplifting story of survival, of the kindness of strangers, and the irrepressible power of sisterly love, a love that can lead us to do extraordinary and unimaginable things.

Brain on fire: My month of madness

I have wanted to read this book for years. I have no idea why it took me so long to get to, but my anticipation did not disappoint. While Cahalan’s story is not difficult to find, I don’t want to say too much. Whether you are interested in the science, the personal aspect, or both, this is a fascinating account. It was deeply moving, highly insightful and incredibly humanising.

Blurb
Susannah Cahalan was a happy, clever, healthy twenty-four-year old. Then one day she woke up in hospital, with no memory of what had happened or how she had got there. Within weeks, she would be transformed into someone unrecognizable, descending into a state of acute psychosis, undergoing rages and convulsions, hallucinating that her father had murdered his wife; that she could control time with her mind. Everything she had taken for granted about her life, and who she was, was wiped out. This is Susannah’s story of her terrifying descent into madness and the desperate hunt for a diagnosis, as, after dozens of tests and scans, baffled doctors concluded she should be confined in a psychiatric ward. It is also the story of how one brilliant man, Syria-born Dr Najar, finally proved – using a simple pen and paper – that Susannah’s psychotic behaviour was caused by a rare autoimmune disease attacking her brain. His diagnosis of this little-known condition, thought to have been the real cause of devil-possessions through history, saved her life, and possibly the lives of many others. Cahalan takes readers inside this newly-discovered disease through the progress of her own harrowing journey, piecing it together using memories, journals, hospital videos and records. Written with passionate honesty and intelligence, Brain on Fire is a searingly personal yet universal book, which asks what happens when your identity is suddenly destroyed, and how you get it back.

What did you read in January? Let me know in the comments below.